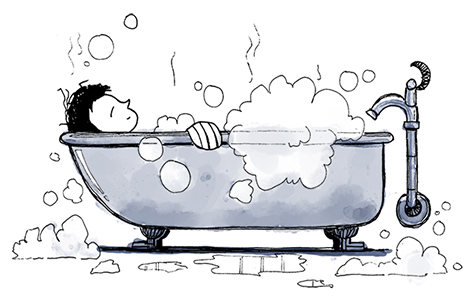 Josh Wright was born in Geelong, Australia. He graduated primary school, high school and university all in this very same town. After finishing a History & Literature degree, and taking a few overseas trips, he settled down to his deluded fantasy career as a famous writer of children's novels. A decade later and with several unimpressive jobs on his resume, he finally got a few books into print. These masterful works continue to fade into history to this very day. You should probably buy one now before they become collector's items. Now working mainly in illustration & animation, Josh remains ever-keen to impose his art onto a weary world...

My email address is:

I already have more Twitter followers than Alexander the Great ever did. It must mean I'm more important.

HOW OFTEN DO YOU UPDATE YOUR SITE?

I usually do three new comics a week. I bought this domain name way back in 1999 when I thought I was gunna be some serious author guy. That's why it's called joshuawright.net and not something more zany. I've just been using it so long it's stuck.

SO IS THIS SITE FOR KIDS? WHAT’S THE DEAL HERE?

Honestly, I’m not sure who it’s for. Myself? When I first started I thought I was a kids' writer - now I just do whatever stuff appeals to me. A critique publishers sometimes gave me on my older stories were that they were too dark or dry-witted for kids. They suggested I do more adult-orientated work. Perhaps that’s what I’m doing here? I guess this site is for stuff with no clear audience. My plan is to wait and see who actually reads it, and then claim I wrote it for them all along.

In other words, I have no idea what I’m doing, but I hope you like it anyway.

DO YOU DO COMMISSIONS?

Of course... but I ain't cheap! See, commissions usually take a lot of back-and-forth with the client, and the work ends up being quite labour-intensive. I'm approximating at around $300USD. Most folks don't have that kind of money laying around, which I understand perfectly. But if you DO have $300 (or more if it's a bigger job), and an interesting idea, feel free to email me.

Also if you've got a creative or merchandising idea for Slack Wyrm, I'm all ears too :)